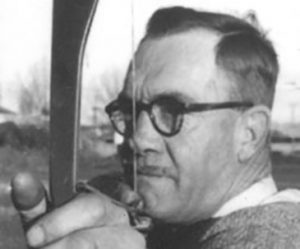 Along with his parents, in 1909 English born William John Burton emigrated to New Zealand as a one-year old. His early years were spent in Hawke’s Bay, excelling at rugby, athletics and boxing whilst at Napier Boys’ High School.

On leaving school in 1924 he took up employment with the Department of Lands and Survey and, after sojourns in Wellington and Napier, he and his new wife, Agnes were transferred to Gisborne in 1940. Over his 45 years here he was to earn a reputation as a talented lithographic draftsman and became the Lands and Survey Department’s chief draftsman.

In the sporting field, he first became a national figure when he took up rifle shooting. He represented New Zealand at both full bore and small bore events, won 9 individual national titles and twice won the Rifle Challenge Cup awarded to the highest scorer in the final for the King’s Prize. His possible over the 900- yard range, in shocking conditions at the 1949 Trentham event is still regarded as one of the finest feats by a New Zealand rifleman.

For all that, it was at the sport of archery that he achieved his greatest fame and, by the 1950’s, he was recognised as the world’s finest short-range archer.

In 1942, he decided to try his hand at archery because of frustration with wartime shortages of ammunition at the Gisborne Miniature Rifle Club, Jim Burton’s mastery of the sport as immediate and phenomenal. So much so, that by the next year he had won the first of what were to become 12 New Zealand Championship archery titles.

By 1952 he had won the Seefab Cup, the international trophy competed for by the world’s best in a postal shoot over a double international round. He won again in 1953 and the next year, followed with a third victory which meant that he retained the cup permanently. At this, the Swedish Archery Association donated a second cup, only to see Jim Burton make that also his own property with wins in 1956, ’57 and ’59. By this time, his fame as a marksman was legendary. In 1958 he was depicted in a Ripley’s “Believe It or Not” cartoon in the New York Globe, over a caption stating he once scored 238 successive bull’s-eyes at the regulation range of 30 yards.

In all, he won 11 international archery titles and 30 New Zealand titles. He lost the New Zealand Open  Championship only once on the 13 occasions he competed between 1943 and 1960.

Locally, he was the driving force behind a 10 year fund-raising campaign which came to fruition with the building of the Gisborne Archery Club, in 1970, as a hall for the sport as well as other community activities In 1977, along with the Ryan Memorial Medal for archery, William John ( Jim ) Burton received the British Empire Medal for his services to sport.