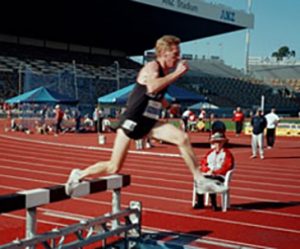 Ron Robertson was born on the 3rd June 1941, in Wellington. Growing up in the Wellington region and educated at Seatoun Primary School and Wellington Technical College. His first successes in the sporting arena were through Soccer, representing Wellington through the Junior Grades. His other chosen sport of Softball saw him play for the Miramar Softball Club from 1963-1965.

After marrying his wife Yvonne in 1965 the couple moved to Gisborne in 1966, where as a qualified builder, built their first home.

His spare time was spent involved in soccer playing for the Eastern Union (later to become Gisborne City) between 1967-1970, also representing Poverty Bay. The resurrection of softball locally during the 1970’s was a major benefactor of Ron’s time, he started up the Richardson’s Mill Club becoming a player/coach and also becoming the coach of the Poverty Bay representative side.

In 1978 at the age of 37, and encouraged by his neighbour at the time turned up to a Gisborne Harrier Club event kitted out in his old sandshoes. This was the start of an incredible running career. His dominance on the local running scene is unprecedented having won the Gisborne Harrier Club Cross-Country title 19 consecutive times, the last at 60 years of age. He is the holder of numerous National Cross-country, Road, Marathon and track titles.

Ron attended his first World Veteran Track & Field Championships in 1985 at Rome. This foray into the competitive world of veteran athletics in the 40-44 age group, culminated in wins in the 3000m Steeplechase, 0.3 seconds outside of the world record held by legendary athlete Gaston Roelants, and Gold in the Cross-Country event. In all, he has attended eight World Veteran Track & Field events. He has amassed 27 Gold and 4 Silver medals. Throughout this period he set 7 world track age group records. Today Ron still holds the world records for the 1500m and 3000m Steeplechase in the 55-59 age group, both set in 1997. Hanging up his running shoes after the 2001 World Games to build his home at Makarori Beach and enjoy the beach lifestyle, the lure back to the track for the 2008 Oceania Masters Games, Townsville, Australia was too good opportunity to miss. Overcoming a few niggling injuries Ron competed in the 65-69 age group winning gold in the 1500m, 5000m, 8000m (cross-country) and 2000m steeplechase events setting a new world record. The times recorded for these events were competitive in the age group 10 years his junior.

Recognition for Ron’s achievements have come in the form of being awarded the NZ Veteran Athlete of the Year 1999 and 2001, recipient of a Gisborne District Council Ambassador Award 1991 and the most successful recipient of the region’s Sportsman of Year award in 1990,1995,1997,2002 and overall Sportsperson of the Year in 1995,1997 and 2002. Life Membership of the Gisborne Harrier Club was presented in 1987 for not only his sporting success but also his contribution to the club and athletics in general.