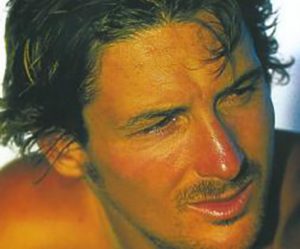 Maz was born in Hamilton in August 1976 but his parents’ passion for surfing saw the family move to Gisborne two years later. Educated at Elgin Primary School, Gisborne Intermediate and Gisborne Boys’ High School, Maz grew up riding waves from dawn till dusk.

His enthusiasm for surfing was more easily satisfied when the family moved from town to Wainui Beach in his teenage years. After surfing the world’s best breaks he still lists Wainui as one of his favourites.

Maz is the eldest child of what could be described as the ‘First Family of New Zealand Surfing’. His brother and sister are winning national and international titles, his mother has worked hard for women’s and girl’s surfing and his father is a national surfing official.

As a schoolboy, Maz entered the Gisborne Boardriders Club contests every month. “It helps to grow up with a lot of surfers who are really good and competitive”. He won his first big contest in 1990. He moved up through the ranks and won national titles. He then toured the world for six years on the World Qualifying Series (WQS). This is the fiercely competitive lower-ranked professional surfing tour that gives surfers the points required for the elite World Championship Tour (WCT).

In 1999 Maz was the first New Zealander to win a WQS event and then in 2001 he finally accumulated the 9000 points required for the WTC – the first Kiwi surfer to do so. By joining the world’s top 44 surfers in the elite worldwide professional circuit, he has achieved recognition for his lifelong passion.

The WCT is not all waves and glamour. There is a heavy air of competitive stress to keep the spot in the tour, but the experience is what every competitive surfer craves.  With a fast, textbook-perfect surfing style, Maz is among the best surfing talent the New Zealand has produced to date. “It’s what I always wanted to do, I knew I could it. It was just a matter of putting my head down and doing it. If you want something bad and are willing to make the necessary sacrifices – just go for it”