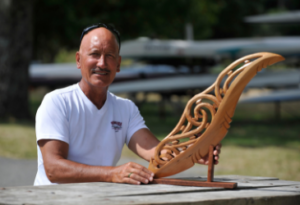 The Godfather and founder of the increasingly popular sport of Waka Ama Sprint Racing in NZ In his teenage years was led by his grandmother into a fascination with canoe building, carving, and the traditions of Polynesian voyaging and technology. On a visit to Tahiti in 1960 he was inducted into the sport of Waka Ama Sprint Racing and established himself on the competition scene accompanied by the absorption of a deep knowledge of paddling techniques, canoe building and paddle making. In 1984, in Papeete, he announced his arrival on the international competition stage with a Bronze medal in the Championships of France against 400 paddlers over a 2500m course.

He returned to NZ in 1985, accompanying his father- in-law aboard the traditional voyaging canoe

Hawaikanui which travelled from the Society Islands and landed at Hicks Bay. At the behest of East Coast elders to his mother Hine he settled in Gisborne and formed the Mareikura Canoe Club, the first of NZ’s waka ama clubs. In 1989 Matahi Brightwell was the 8th recipient of the prestigious “Blue Water Medal” awarded by the Royal Akarana Yacht Club and the following year’s 9th award went to Sir Peter Blake.

He established a long record of domination over NZ waka ama competition and coaching, as well as the establishment of 28 new clubs throughout the length and breadth of the country. In 1987 he took the first team from NZ to attend a World Championship In 1990 he became the founding President and organiser of the Waka Ama NZ Sprint regatta. He has attended every one since – 2019 will mark the 30th anniversary. 5 clubs, 120 participants, attended those first nationals whereas 2018 witnessed 75 clubs with over 2500 competitors. He was named the Maori Sportsman of the Year in 2002 in recognition of his achieving 8 gold medals at the Waka Ama Sprint nationals in both open and Masters Men divisions. He remains the holder of a world record in the “Tahiti Moorea,” a challenge event on the world open water circuit. Paddling on his waka paced swim partner Nat Waring over the 17.2kms, to establish a new record of 4 hours 57 mins which stands to this day. Perhaps his proudest achievement lies in his foremost role in bringing about increasing participation in a sport which gives further encouragement for his people to take pride in traditions and culture.