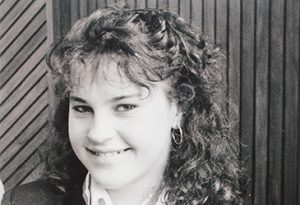 At the age of eight she took up the sport of trampolining.The following year she won a gold medallion the Grade 5 girls’ section of the North Island Championships.

In 1984 Kristen’s talent started to shine, winning bronze medals at both the Auckland and North Island Championships. She participated at the National Championships winning gold medals in the Grade One women’s trampoline an in the women’s double mini. From here she was selected as a New Zealand representative at the Pan Pacific Age Tournament.

Kristen was noted for her great attitude and work ethic in her training. She had great form (tightness and straight lines) and an excellence at centring on the trampoline. Over the next few years many medals were won at the Auckland and North Island Championships. With determination at NZ Trampoline Championships, she accumulated over 11 Gold medals and 8 silver and bronze medals.  She was rewarded with selection as a New Zealand team representative at the 1986 Pan Pacific Games and the Trans-Tasman competition.

At 14 years of age Kristen was selected for the 1988 World Trampoline Championships held in Birmingham, Alabama. The Russians dominated the event but Kristen gained silver in the Open Double Mini Trampoline team competition, a first world championship medal by New Zealand in a team event.

In 1990 at 17 years of age Kristen joined Paula O’Gorman, Alana Boulton and Kylie Walker to compete in the Teams Double Mini Trampoline at the World Championships held in Germany. Attracting over 1500 competitors, the sport was very popular in the northern hemisphere and was screened live on television throughout Europe. The strong, confident team outclassed traditional winners Germany and Australia and won gold. Kristen also competed in the 15-17 years Double Mini Trampoline taking silver. 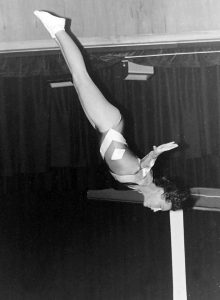 Back home Kristen was awarded the 1990 Sportswoman of the Year. Her and the other Gisborne team members from the Worlds event received the Ambassador award from Gisborne District Council.

Kristen continued to work hard at her skills. As an individual she had to meet an international qualifying mark before even being eligible for national selection. In 1992 she, along with the same previous three teammates, made the New Zealand team to defend their international title at the World Championships to be held in Auckland. In front of a ‘local’ crowd the team performed outstandingly again to win the Open Gold medal in the Teams Double Mini Trampoline.

But it was her trampolining prowess that brought local advocate and national coach Doug Callahan to regard, “the highlight, over all the years, was Kristen Glover winning golds in the team’s competition twice….that was a marvellous achievement.”