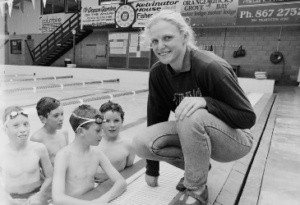 A New Zealand representative at the 1993 Pan-Pacific Games in Japan, 1993 World Championships in Spain and the 1994 Commonwealth Games in Canada. Julie McLaughlin, born, 11 August 1974, became the first Gisborne swimmer to forge a mark in international swimming. Whilst on a scholarship to Louisiana University she also competed at USA’s national swimming championships. From the ages of 6 to 10 years she was a member of the Gisborne Swimming Club based at the old Central School’s outdoor 25 yard pool. Her determination to keep improving by battling hard was always important in turning early promise into the realization of genuine talent, but membership of the newly formed Enterprise Swim Team after 1985 and, the opportunity for all-year round training in an indoor heated pool under the guidance of professional coaching were also significant factors. At 13 years she set a NZ Junior record for 50m butterfly and attended her first Open National Championships. Her performances through 1990-92 earned selection in the NZ Development Squad, competing at meets in Australia. She claimed 4 golds and 2 silvers at a national age-group championship and, at 18 years, she hit the headlines and stole the limelight from Danyon Loader at the NZ championships when she shattered the NZ record for the Women’s 200m Breaststroke. It came as no surprise when she was named the 1992 Gisborne Sportswoman and Overall Sportsperson of the Year. At the 1993 World Championships at Palma de Mallorca in Spain, Julie was ranked 14th fastest in the 400m Individual Medley and 16th fastest in the 200m

in the 200m IM was the 12th fastest in the world at that point. Vancouver’s 1994 Commonwealth Games saw her placed 11th in the 200m and 400m IM’s and 200m Backstroke as well as 12th in the 200m Breaststroke. Prior to that her versatility at all strokes and performances with 2 golds, 4 silvers and 3 bronze at NZ Open Championships resulted in her winning a swimming scholarship to USA’s Louisiana State University. There, between 1994 and 1997, Julie McLaughlin became

established as one of the University’s all- time top 10 women swimmers. She still

remains among the LSU rankings in 4 events. She also competed at the highest level of US intercollegiate sport, the NCAA as well as the U.S. nationals. The LSU magazine for swimming referred to her as an “All American”.

Over her career Julie McLaughlin set a total of 12 NZ records and in one outstanding period in 1993 she reduced the 200m Breaststroke mark 4 times at consecutive meets over a 3 week period. She still holds Hawke’s Bay-Poverty Bay records in Women’s age-group Breaststroke, IM and Open Breaststroke, IM and 1500 Freestyle.