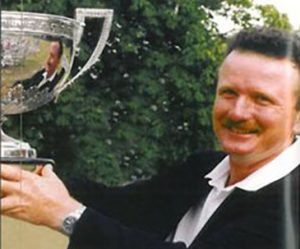 He became a carpenter in Gisborne and then studied theology at the Holy Cross College in Dunedin. Joe was ordained as a Roman Catholic Priest in Gisborne in 1987, but after a year in a Rotorua parish, he left the priesthood and re-entered the building trade in Gisborne full time.

Joe began playing croquet in 1973 and his first major victory was the North Island Open Singles in 1976, winning the title over a test player. That same year he was invited to participate for the first time in the prestigious Top Eight event. In the 1978 New Zealand Nationals he was runner-up in the singles and the doubles championships.

Joe went from strength to strength, winning very many titles, both nationally and internationally, both in the singles and in the team events, over many subsequent years. Among the highlights were the MacRobertson Shield competitions against Great Britain and Australia – the croquet equivalent of cricket’s ‘Ashes’. Perhaps the greatest achievement out of so many, was the World Championship where Joe won the inaugural World Open Singles in 1989, aged 31.

From 1986 to 1990 Joseph Hogan was ranked No 1 in the world.  Being an amateur, Joe reaped no income from his years of playing croquet. He is grateful to the New Zealand Croquet Council for paying entry fees, travel and accommodation – big expenses for a small-scale sport.

Joe has coached croquet at all levels, including international, and he made a coaching video in 1990. He also gave naming rights to a New Zealand sports firm, George Wood, which manufactures ‘Joe Hogan’ croquet mallets that are available worldwide.

Joe Hogan is married and has three children. In 2002 he has made another career change and is a secondary school teacher in Gisborne. He is very happily a family man and is quite involved in Christian community life. For recreation Joe plays, coaches and watches croquet. He also enjoys bush walking, music, theatre and watching most major sports