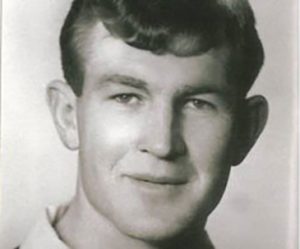 Born into a Gisborne farming and strong rugby- playing family in May 1946, Ian was educated at Patutahi School and Kings College, Auckland.

Highly successful in a variety of sports, while at King’s, both for the school and for Auckland Province, Ian then played a season in Poverty Bay before moving on to Canterbury for farming experience.

Moving up through the rugby ranks he represented Canterbury, and became the only player ever to captain both the North and South Islands’ teams.  Ian was selected for the All Blacks tour of Britain in 1967 and quickly became known for his great pace and strength. In his first test he broke his nose in a tackle in the first five minutes: “no way was I to come off after five minutes in my first test!” He counts this as one of his most memorable matches.

In a 1968 Test in Australia he scored three tries – a tally not achieved by an All Black since 1935.  He was an All Black for 10 years, playing 113 matches including 39 tests, of which 38 were consecutive. He scored 50 tries for the All Blacks (180 points). In all he scored 115 first-class tries, a number of which were described as ‘freakish’. One of the greatest was in 1971 against the British Lions where he ran 55 yards from midfield.

Ian was promoted to All Black Captain in 1972. He led nine test matches and fellow All Blacks regarded him as a fine captain who led by example and particularly looked after the youngsters in the side. His toughest time was the incident and its aftermath that resulted in All Black Keith Murdoch being sent home from Britain.  Ian was dropped as captain in 1974 after a disappointing 1973 season. However, not worried about losing the top spot, he was retained in the team under new captain Andy Leslie, the Tane Norton, and his playing went from strength to strength.

Ian Kirkpatrick was awarded an MBE in 1980.

Married with three daughters, he continues to farm in Poverty Bay.