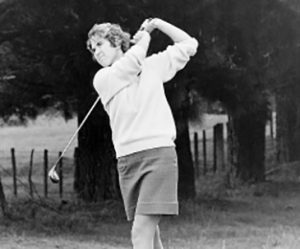 In 1956, 12-year-old Heather Booth made the decision, to forsake previous equestrian ambitions and take up the game of golf. This came as no surprise as both parents were regarded as the district’s top golfers, with Nan on a scratch handicap and Jim on 2.

After primary schooling at Patutahi she went to boarding school but holidays often revolved around furthering her golf game with the result that, at 13 years of age, she scored a hole-in-one at a Rotorua course. By the time she joined the ranks of school-leavers, she was down to a 3 Handicap.

Dedication, hard practice, a golf swing the envy of her peers, and a tough mental attitude brought successive golfing achievements year after year. She became the first in the District to achieve a +1 handicap. In 1961, aged 17 years, she represented the NZ Juniors against

By 1965 she had been awarded the NZ Junior Golf Medal and been named “Golfer-of-the-Year” by both the Eagles Society and on a trophy presented by U.S. Professional, Marilyn Smith. She recalls one of her memorable achievements over that period was beating her mentor Mum for the first time in the final of the Poverty Bay Golf Club’s Women’s Championship.

Entry into the senior ranks after 1966 saw her continue to make her mark at home and abroad with further NZ representation in the Tasman Cup, the Commonwealth Tournament and in Madrid at the Espirito Santo Trophy for the Women’s World Amateur Team’s Championship.

In 1968 Heather achieved her career highlight while on an overseas working holiday, playing golf in the United Kingdom. Coaching from leading pro John Jacobs and the introduction of men’s clubs played a part as Heather became the only player from Poverty Bay, and the first NZ woman golfer to have won a premier international event, with her victory in the “Wills’ National Matchplay Championship” at Kingswood, Surrey, England. At the time that was the major women’s tournament on the European circuit, and it was said that the only other NZ golfer to have achieved a similar distinction was Bob Charles’ win at the British Open.

1969 was also a stellar year in that, among others, Heather won the Australian and Victorian stroke play championships and was runner-up for the second time in the Australian matchplay title after coming back from 4 down with 5 holes remaining, only to lose by one stroke at the 37th hole.

Surprisingly, although her overall record in matchplay was outstanding, an individual NZ Women’s Championship eluded her. Nevertheless, over a 10 year period she set 12 course records in NZ and overseas, including the breaking of an 18-year-old record at Melbourne’s Commonwealth Club and a 40-year-old mark at the Hale Club, Cheshire.

The sporting world in 1970 was predominantly a man’s domain but recognition of Heather’s achievements could not be denied and she was named the District’s second ever “Sportsman of the Year”.

As part of their influential role in encouraging and nurturing Heather’s game, parents Jim and Nan Booth set up the Booth Shield for interprovincial junior golf competition in 1961. Today, as over the past 50 years, that Shield continues to encourage NZ’s young golfers in competitive play.