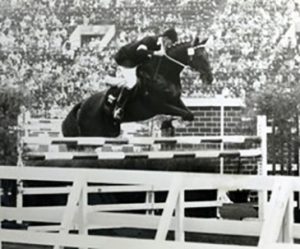 Local Equestrian Legend. Inducted into the Tairawhiti Legends of Sport “Hall of Fame” in 2013.

Graeme Hansen was born 20 March, 1934. He grew up at Hexton, on the outskirts of Gisborne, attended Mangapapa Primary School, Gisborne Intermediate and Kings College in Auckland. Graeme started riding a horse to school at five years of age. He competed in the 1939 Gisborne A & P Show, winning Best Boy Rider Under 9. He started hunting at Ruatoria in 1942.

Graeme competed in the first Fédération Equestre Internationale jump held in Gisborne at Ngatapa in 1952, coming second. He has competed at shows throughout New Zealand and Australia for many years. He represented New Zealand in show jumping teams in 1959, 60, 61, 62, 63, 64, 67 and 78.

Graeme’s best horses were Saba Sam -an outstanding horse, both as a jumper and hack hunter. Whitole was his best race horse, winning the Hawkes Bay and Manawatu Cups, and Red Jet -best hunter. Saba Sam and Hansen made quite a combination, making waves and winning awards in Australia, Japan and New Zealand. After their international debut in 1959, they represented New Zealand again in 1961 in Australia, in New Zealand in 1962, Australia in 1963, Tokyo in 1964, England in 1965 and Australia in 1967. To fill the gaps – there was no national team in 1960 nor 1968, and in 1966 Hansen had a year off. Together they won champion hack and hunter of the year at the Horse of the Year Show and the puissance (high jump for horses) three times in a row. They retired in 1968.

In 1964 Hansen and Saba Sam were members of New Zealand’s first Olympic show jumping team, which competed at the Tokyo Olympics. His older brother Bruce also made the team.

He has also been an international judge at many prestigious events such as the England Horse of the Year Show 1978-1983, Melbourne Royal Show, Sydney Royal Show, Adelaide Royal Show and numerous New Zealand Royal Shows. He was a well respected judge all over the world and was often asked to speak at judging seminars.

Hansen was still competing, and picked up placings at the 2006 Gisborne Show.He hunted widely, and just three weeks before his death was on the hunting field in Rotorua during Hunt Week.