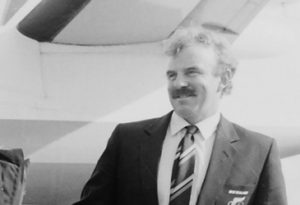 Terence “Ben” Hutchings, was born 3 November 1946 in Sydney,  the son of a kiwi father who had married and settled in Bondi. At 6 years of age a lifetime of involvement in water sports began when he became a “nipper” with the Bondi SLSC and by 12 years he was an inaugural member of a local Board riding club.

When his love of surfing brought him to New Zealand in 1968 he became a member of the Gisborne Board Riders Club. At the local breaks he became something of a legend, particularly in big surf, winning the New Zealand Boardriding title in 1975 and the kneeboarding championship in 1976.  He was invited to compete in three big wave contests on the North Shore of Hawaii, The Smirnoff Pro AM, The Duke and the World Championships at San Diego,  where he was placed 12th. His passion and zest for wave riding has continued since those days with wins in the Over 40’s championship at the 2008 Australian SLS Championships and the Over 60’s title at the 2012 Surfing NZ Championships.

Ben returned to surf life saving in 1969 when he joined the Midway SLSC after his arrival in Gisborne. He remains a life member of the club to this day having played a significant part not only as a competitor who won 8 titles and had 30 placings in Iron Man and paddleboard events at NZ Championships between1970 and 1981, but also as a coach and mentor for the club members. His value in these roles is best reflected in the fame his son Cory achieved in winning 3 World Iron Man titles.

Involvement in kayaking, initially as a competitor, followed on from SLS but it was not long before his quality of being able to identify with the paddlers and understand their needs led future champions Alan Thompson and Ian Fergusson to ask him to take the role of coach, with such success that by 1984 he had been appointed as the national  coach, accompanying the team to success in world championship regattas and culminating in the gold medal victories achieved by the New Zealanders at the 1984 Los Angeles and 1988 Seoul Olympic Games

Ben returned across the Tasman in 1990 after accepting a position offered by the Australian Institute of Sport. Since then, before returning to Gisborne each summer, as coach he has been central to the achievements of Australian champion individuals and team boats at  world  title events and a further 6 Olympics (1992 Barcelona, 1996 Atlanta, 2000 Sydney, 2004 Athens, 2008 Beijing, 2012 London).

In the Queen’s Birthday honours of 2015, Ben was awarded the Order of Australia for his services of over 50 years to kayaking, surf life saving and surfing in both Australia and New Zealand. His role at 8 consecutive Olympic Games stands as an extraordinary contribution to the sporting landscape. Combined with his lifetime of dedication to competing and fostering success it comes as no surprise that there are many people associated with water sports, on both sides of “the Ditch,” who regard Ben Hutchings as a “legend.”