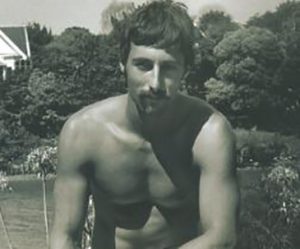 He was a talented rugby player and was selected to play in the Boys’ High 1st XV for two years and in the North Island Under 18 team.

Alan started kayaking as part of the fitness regimen for surf lifesaving, and paddling soon became a passion for him.  He represented New Zealand in six different World Kayaking Championships from 1981 to 1987 and he was a finalist in each one. He won two silver medals in 1982 and a bronze in 1983. He has also won numerous New Zealand and Australian titles.  Alan was selected to compete for New Zealand in the Olympics Games in 1980, 1984 and 1988. In the 1984 Olympics he won two gold medals, an individual gold in the K1 race and a team gold in the K4 event.

In the 1980s the local Olympic paddlers trained on Gisborne rivers for about 10 months of the year, the training being locally planned and executed with local helpers. With little or no sponsorship available until after the successes of 1984, training was an individual and costly exercise. Each year the paddlers went to Europe for a couple of months for ‘polishing off’, competing in regattas and then the World Championships.

Alan locally manufactured his kayak in which he won his gold medal in 1984.

In 2002 he is coaching Gisborne youngsters for the Poverty Bay Kayak Club and the Waikanae Surf Life Saving Club. He enjoys paddling recreationally when time allows.

Alan is married, has two children and is a self-employed businessman in Gisborne.