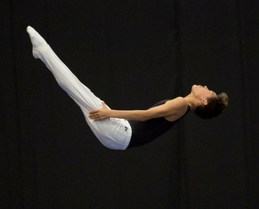 Tairawhiti Rising Legend Kaiya Huta is on a mission to become the world’s first Māori Olympic trampolinist. The 15 year-old took out the top medals at this weekend’s Trampoline Nationals. His next big goal is the 2018 Youth Olympics.

He’s the top trampolinist in NZ for his age grade. This year the Gisborne based teenager claimed gold in the synchronized tramp and silver in the double-mini tramp at Auckland’s Trampoline Nationals.

What was an afterschool hobby is now a passion for Kaiya. After choosing between a trampoline and a rugby ball at the age of nine, Kaiya’s sport of choice is one he hasn’t regretted, winning multiple domestic and world medals over the years.

Doug Callahan (Coach) says, “He coaches for me and the kids look up to him and he’s really good to train.”

The TKKM o Ngā Uri a Maui student says although there are not many Māori trampolinist, he hopes to become the first Māori Olympic trampolinist.

Callahan says, “If he puts the training in, and he does a lot of conditioning he will make it.”

But his big leap will be gaining entrance to the 2018 Youth Olympics in Buenos Aires.